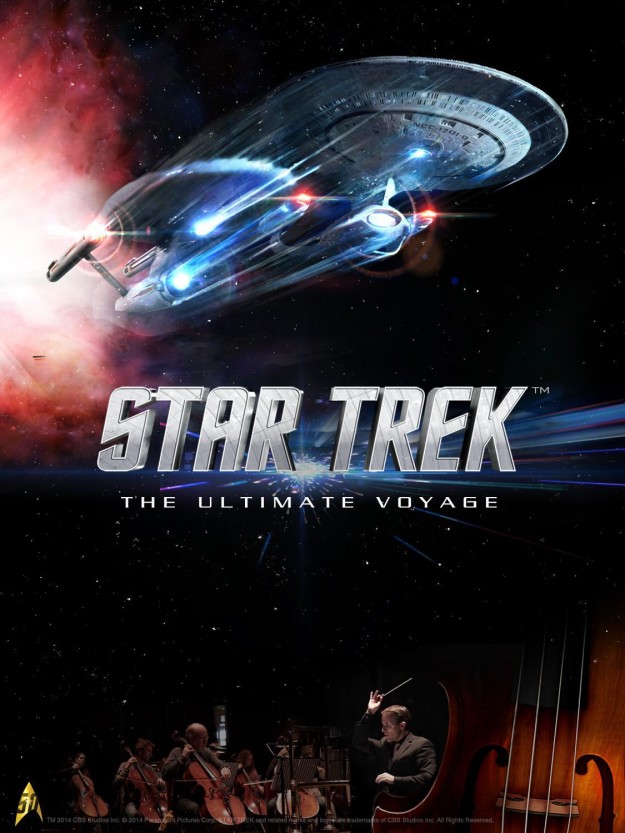 Star Trek: The Ultimate Voyage brings five decades of Star Trek to concert halls for the first time in this galaxy or any other.

This lavish production includes an impressive live symphony orchestra and international special solo instruments. People of all ages and backgrounds will experience the franchise’s groundbreaking and wildly popular musical achievements while the most iconic Star Trek film and TV footage is simultaneously beamed in high definition to a 40-foot wide screen. The concert will feature some of the greatest music written for the franchise including music from Star Trek: The Original Series, Star Trek: The Motion Picture, Star Trek II: The Wrath of Khan, Star Trek IV: The Voyage Home, Star Trek: Insurrection, Star Trek: The Next Generation, Star Trek: Deep Space Nine, Star Trek: Voyager and much more. This never-before-seen concert event is perfect for music lovers, filmgoers, science-fiction fans and anyone looking for an exciting and unique concert experience.

William Shatner, original Captain Kirk and authentic cultural icon encourages fans to see the rare event. “A marvelous theatrical event is taking place in your city and it’s going to be fantastic,” the 84-year-old Shatner says of “The Ultimate Voyage,” which presents the Czech National Symphony Orchestra playing musical themes from the small and big screen, from the original 1966 CBS television shows starring Shatner and late friend Leonard Nimoy to its TV and movie follow-ups. The music will play against a backdrop of scenes from several “Star Trek” properties projected on a 40-foot wide screen.

“It’s wonderful music, written mostly by Jerry Goldsmith,” Shatner continues. “He was such a great musician, a composer who had he been writing for any other venue would have been playing for the king and queen. He would have been renowned, he was that good.  It’s conducted by Justin Freer, who was a protegé of his. This is a celebration.”