In the new movie Lucy, Scarlett Johansson plays a common American going to school in Taiwan that gets mixed up in a drug smuggling ring.  Lucy delivers a briefcase to Mr. Jang’s, a Taiwanese gangster and drug lord, containing a highly valuable synthetic superdrug that can increase the user’s brain function capacity. During the transport , something goes wrong and the drug begins releasing brain-enhancing drug into her system. As a result, she begins acquiring increasingly powerful mental talents and enhanced physical capabilities, such as absorbing information instantaneously, telekinesis, mental time travel, and can choose not to feel pain or other discomforts, in addition to other abilities. With her superhuman powers growing, Lucy only has a short amount of time left to find the men responsible for her new found powers and contacts a well known scientist and doctor, Professor Norman [Morgan Freeman], whose research may be the key to saving her. 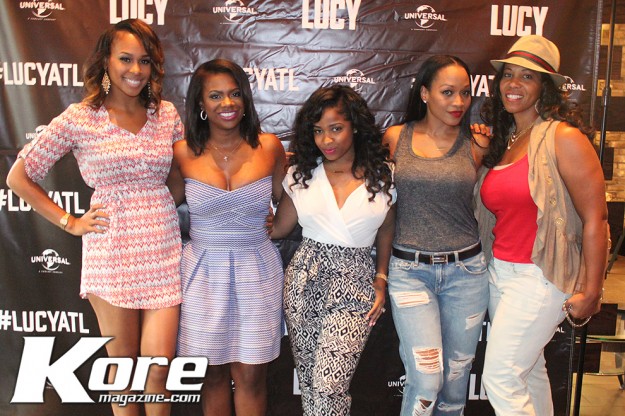 In Atlanta, Kandi Burruss from the Real Housewives of Atlanta hosted a private screening of Lucy, where many of her Cast Members and other Reality Stars came out to support the new film. Monyetta Shaw and Sheree Buchanan from the new reality show, Atlanta Exes, along with Nivea and Toya Wright, Atlanta Dream‘s Angel McCoughtry, Rasheeda & Kirk Frost from Love and Hiphop were all in the building.

See more in the Gallery Above.