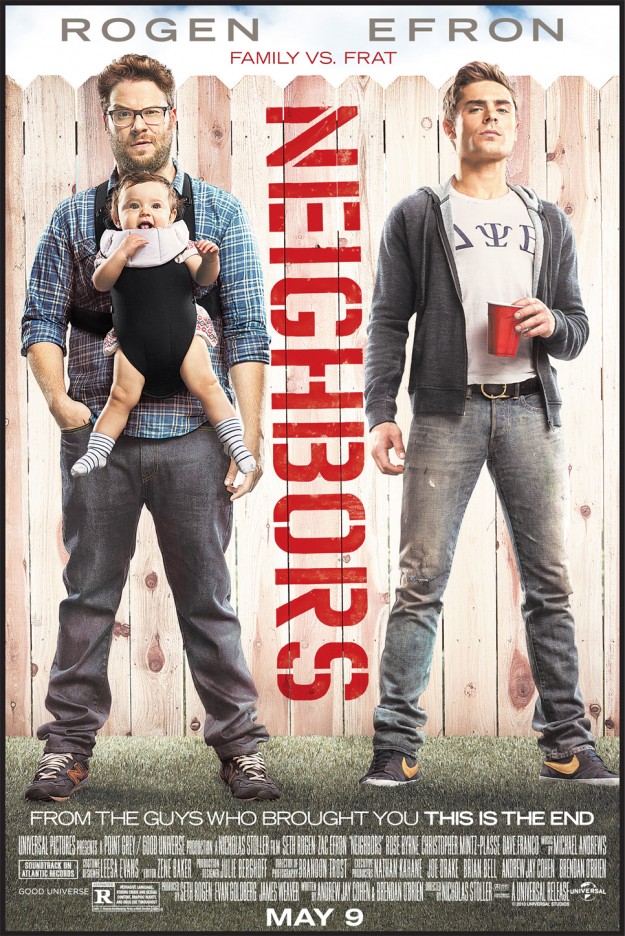 Did you ever think you missed out on being cool? Maybe time slipped by and you grew up as a new homeowner in a quite neighborhood?

Well that exactly what happens to Kelly and Mac [Seth Rogen].  When suddenly the frat brothers move in, bringing the party with them. Zach Efron plays Teddy the Frat President, and Pete [Dave Franco] is his right hand man, and they quickly becomes friends with Kelly and Mac. As each night gets a little louder, Mac asks Teddy to lower the noise. When Teddy goes back on his word to keep the noise down, Mac calls for reinforcements to deal with the problem.

As the family feuds with the frat brothers, things get hilariously dangerous and the fraternity end ups on thin ice with their college. After receiving their final warning and being placed on probation, Mac and Kelly pull a prank so ingenious that Teddy and Mac are forced to respond. All hell breaks loose, from Robert DeNiro wild parties to Christopher Mintz-Plasse having sex in the bushes, this comedy shows how things can go really wrong really quickly when a family and a frat house become Neighbors.

IN THEATERS MAY 9th

Neighbors - Movie Ticket Giveaway
Your Entries
0
Total Entries
16
Days Left
Ended
Win a Pair of Tickets to the Advanced Screening of  "Neighbors" on Wednesday May 7th 7:30pm at AMC Parkway Pointe (Cumberland). Must be 18+ to Enter and Win. For more details please email info@koremagazine.com
This contest expired.
Official Rules Powered by ContestHopper
close

Must be over 18+ to Enter and Win Contest.
Contact info@koremagazine.com for further details and Questions.