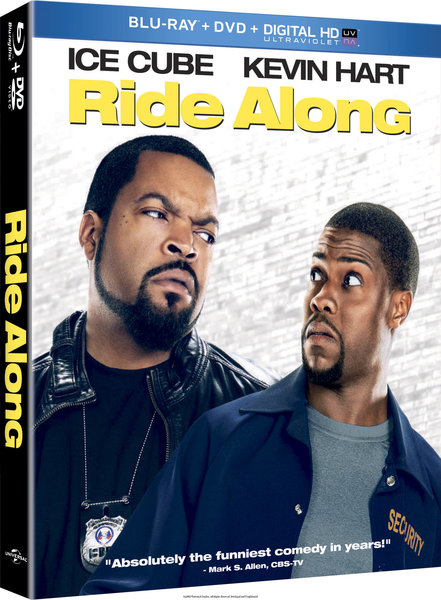 It’s Here!!! The hilarious new comedy “Ride Along”, featuring Ice Cube and Kevin Hart is now available on DVD & Blu Ray. After making history by being #1 in the theaters for three weeks in a row, this comedic film is ready to take over your DVD collection. The film is about a high school security guard Ben (Kevin Hart) has been trying to show decorated detective James (Ice Cube) that he’s more than just a video game junkie who’s unworthy of James’ sister. When Ben finally gets accepted into the police academy, James invites him on a ride-along designed to scare the hell out of him and ultimately demonstrate if Ben has what it takes to take care of his sister.  Also starring John Leguizamo and Laurence Fishburne, and Tiki Sumpter, Ride Along is an action-packed comedy with big thrills and even bigger laughs.

The Blu-Ray release will include special features such as Kev & Cube’s Wild Ride Along that shows firsthand how these two megastars fed each other creatively and the DVD will put audiences backstage as they visit the cast and crew on the set of shooting the film.

Bonus Features Exclusive to the Blu-rayTM: