In this Dark and fast paced movie Revenge lurks in the shadows for a neighborhood kingpin (Terrence Howard) as he starts to receive suspicious packages.  Unsure of the meaning Howard and his crew start to investigate and look for the source of this taunting messages. Meanwhile Victor (Colin Farrell) meets a beautiful women (Noomi Rapace) which is keeping a deadly secret quite over his head.  Now with blackmail scratching at his door, a neighborhood gangster on high alert and revenge still in his heart Victor must adapt to the rules before the game is over.  Did we mention his best friend works for the bad guy and his snooping around where he doesn’t belong?

For the director of The Girl With The Dragon Tattoo,  Niels Arden Oplev.

RATING: GREAT! The film kept you guessing what was around the corner. Good Acting along with some good action sequences. 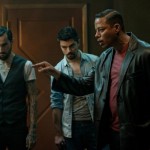