The classic phrase, Third Time’s a Charm came true for American sprinter Allyson Felix as she raced in her third Olympic Games to claim her Gold Medal in the women’s 200 meter.  Leading up to the Olympic Trails many were uncertain what other open events Allyson would run, would it be the 100 or the 400 meter? As she appeared on the track during the 100 meters many were stunned to see her race follow sprinter Carmelita Jeter, but none were ready for the surprise at the end when Allyson was in a dead tie for 3rd, which would move her to the Olympic Games in London. After overcoming that obstacle she traveled to the United Kingdom preparing to race some of the fastest women in the world, and to claim that Gold medal she’s been so close too. 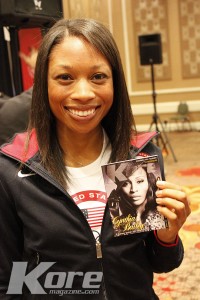 “After my 100 race in Doha, Qatar, people actually started to believe in me as a 100 meter runner. The 200 is my baby, it’s my favorite. I’ve had 8 years to think about being a Silver Medalist, so it means a lot to me to have another opportunity to run, but the 200 is my main focus” she told Kore Magazine.

Experience is valuable. Each Olympic Games has been a little different and I have learned new things from each one, I’m at a place now where I can use those experiences and go forward with it.