As the Prime Time sport of the Olympic Games, Swimming is starting to see an interesting trend among older athletes staying in the sport longer and returning from retirement.  As we sat down with Brendan Hansen, the current Captain of the Men’s U.S. Swimming Team, we spoke with him in regards to his return to the pool and how that came to be.

“After retirement I started swimming just for fitness. Then I started swimming more and more, and I had to ask myself, “Why am I Swimming, is it just for fitness or are you trying to come back?”  I talked to my coach [Eddie Reese] and he told me that I look stronger then I have ever been. “You’ve been doing triathlons for the past two years and I think this could be your best Olympics if you go into this upcoming Games”, he said that was a year and half ago.  It was really weird how all the steps started coming into play: When Eddie Reese is telling you this is the fitness that you’ve ever been, and your wife is telling you “Do This”. It just all seem to fit well and it’s been that way ever since I’ve gotten back in the water. Things are falling into line where the never have before. I don’t have to work as hard to do the things that I’ve done, it’s been a really fun process and I’m going to enjoy it. ”

“I’m a 33 year old athlete, which is a lot different for a college freshmen.  I know what I need to do to be successful. “ 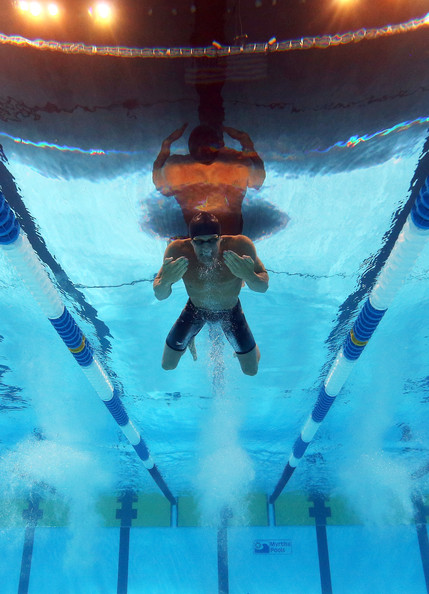 “I know the last two Olympics I had walked off the pool deck feeling like I didn’t get to show what I could really do. It’s like hitting your taper at the right time. I just want to swim right, that’s what I want to feel like, that’s my main goal. Every day I spend time taking care of what needs to be taken care of, and that maturity level going into this Olympics is really going to show up.”

“The experience as an Older Athletes what we pride ourselves on in these Olympic Games.”

How has being Older changed you as a swimmer?

“I’ve swam since I was four years old, your body is very accustomed to the challenges of swimming, but if you change something you body will change in composition. I didn’t think I had a lot of weight to loose. I was bulky over the years of weight training and swimming; I was 197 in 2008, I am 187 pounds now. when I did triathlon I was 178 pounds,I never thought I could get down to 178 pounds. Triathlon challenged my body in a completely different way and my body changed with that. It’s only benefited my to take a 10lb plate off my back when I swim and race now. It’s been really interesting how it’s all worked out.”

On July 29th, Brendan Hansen won a Bronze Medal in the Men’s 100-meter breaststroke, Hansen touched the wall in a time of 59.49 seconds, beating his long time Japanese rival Kosuke Kitajima which placed fifth with 59.79.