Atlanta is home to many extraordinary music artists and last night a few of the greatest were on the stage together to introduce Killer Mike‘s new album titled Company Flow.  Held at Tree Sound Studios in North Atlanta, The Morehouse Man himself, Michael Render aka Killer Mike shared with an exclusive crowd of Atlanta’s music elite and credible media his new project that has been long time coming.  As the soul food dinner was severed people got to mix and mingle with Mike and the whole Tree Sounds crew was we got a sneak listen of the album.  Dubbed Ghetto Gospel Mike’s style has been honored by everyone in the music game, with collaborations with Outkast, which landed him a Grammy, to T.I., Young Jeezy, Bun B, Bone Crusher and Three 6 Mafia.

With a heart ache introduction, which gave homage to his inspiration, his late Grandmother, Mike talked about what inspires him to rap and to produce “REAL” rap music.  What could be considered controversial topics ranging from corruption in politics to true urban lifestyles of the rich and not so famous the album speaks volume for what could be the return of The Monster.. Killer Mike.  As the second song came about the crowd was surprise with a guest appearance by T.I. who jumped on stage to congratulate and pay homage to the nights host, as the two shared the stage introducing their new single, BIG BEAST which also features Bun B and Trouble.

“This is One of the Finest Artists.. When it comes to the Quality of Art, Time and Attention to his craft..” says T.I.

Still torn up from his late Grandmother passing just days before, Killer Mike turned a sad situation into a celebration of a special woman’s life and the impact on her grandson’s life and career as a Grammy winning Rap Artist.  As he takes new steps with Grand Hustle and announces to the world that Mike Bigga is back, another surprise pops up.  Not only did the King of South (T.I.) come to give applause, but Nelly moved through the crowd and jumped on stage to share a few words as well. 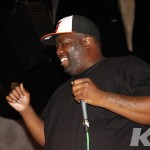 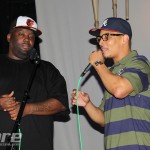 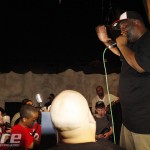