The night of Clive Davis‘ Pre-Grammy party the Queen of R&B, Whitney Houston has died. Her publicist Kristen Foster confirmed the 48-year-old’s passing on Saturday in her hotel bathroom at the Beverly Hilton Hotel.  Reporters have confirmed she was found in a tub submerged underwater.  The reports say that Whitney had been in the bathroom for over an hour when her stylist team began to worry, as they entered the bathroom, she was found drowned.  Bodyguards attempted CPR but it seems it had been too late for the troubled singer.

The past few years Houston’s career was hampered by drug abuse and low album sales, reports of her taking Xanax before shows to help calm her down, along with her lengthy adventure with cocaine makes fans wonder.  Did she take an Xanax before getting ready for her performance at the Grammy Party?  Did her relaxing methods and a bathtub of water make a lethal combination for the singer? 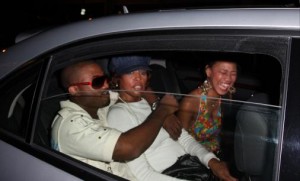 Reports that R&B singer and close friend, Ray J was in the building have been buzzing around the Internet.  He tweeted a pic of him and Clive Davis before the Grammy Party roughly the same time of Whitney’s death, so he was in the area. According to a friend close to Ray J, the “One Wish” singer allegedly found Houston dead at the Beverly Hilton, but Ray J’s publicist is denying he was anywhere around; Twitter is saying otherwise. The two have been spotted around L.A. in the past few weeks and have been known to have a special relationship although he insists that they were just friends.

Whitney recently has been filming an upcoming film, Sparkle set to be released in August.  And there were talks of a Waiting to Exhale sequel but that looks to be on hold. Houston ruled the pop and R&B charts with classic hits like “I Will Always Love You,” from the Bodyguard Soundtrack and the 80’s hit “I Wanna Dance With Somebody” . She also had massive success outside of music with films like “The Bodyguard” and “Waiting to Exhale.”

“The biggest devil is me. I’m either my best friend or my worst enemy,” Houston told ABC’s Diane Sawyer in an infamous 2002 interview with then-husband Brown by her side.

One of the most recent performances of Whitney Houston singing her classic I Will Always Love You, her last time singing was for Kelly Price’s Pre-Grammy Party two nights before her untimely death.