Every successful film franchise looks to keep the momentum alive with Stories of Origin, and The Amazing Spider-Man is no exception especially after three films grossing billions of dollars.

In 2002 Spider-Man crawled onto the big screen with Marvel’s debut of the Amazing Web Crawler reaching over $800,000,000 in box office sales. With such a large number Spidey’s sequel dropped in 2004 and delivered $780 million.  In 2007, producers released the third installment of the Spider-Man series revealing Spidey’s most popular enemy, Venom which helped the film earn over $890 million on screen.  With some fans disappointed in the franchise for weak character plots and too much love story, producers had no choice but to put a darker twist on things.

The main question is who is going to be the Villain?

First came the Green Goblin, then Dr. Octopus in the squeal, Sandman and Venom followed in the last film.  So who will battle the Web Slinger in the new untold story? Sources reveal that Dr. Curt Connor aka The Lizard (Rhys Evans) will be next in line, or should we say first in line to battle Peter Parker.

Shown below with a Green Screen glove (probably to where first signs that his transformation has began) The Dr. meets Peter, his student to discuss Genetic Mutation. 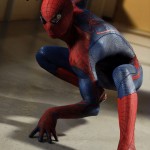