It’s your turn.. B4.. Direct Hit, that’s what Director Peter Berg is hoping for with his new film BATTLESHIP.  Based off the popular board game, the film features a American fleet of sea ships that discover an unknown armada of alien ships.  The water gets a little murky when the alien ships show off their advanced weapons in a destructive way. Some of the artillery used in the film are shaped like the pegs used in the original board game.  Once the alien ship’s show  their bad intentions,  it’s up to Admiral Shane played by Liam Neeson (Taken/Unknown) and his crew of brave sailors to do what is necessary to stop these alien intruders.  Actress Brooklyn Decker (Just Go With It) plays Admiral Shane’s daughter which has a bit of a love interest with Alex Hopper (Taylor Kitsch) giving the film a softer side.  The film also features Alexander Skarsgard (Eric the Viking of HBO’s True Blood) who plays Stone Hopper the older brother to the main character Alex Hopper.

Wait, is that Rihanna holding that BIG gun?  Rihanna plays the role of Raikes, a FBI espionage agent who goes along with the navy to defeat the alien armada of space ships. With new Navy Tattoos and even a sailors attitude Rihanna seems to fit her character well. 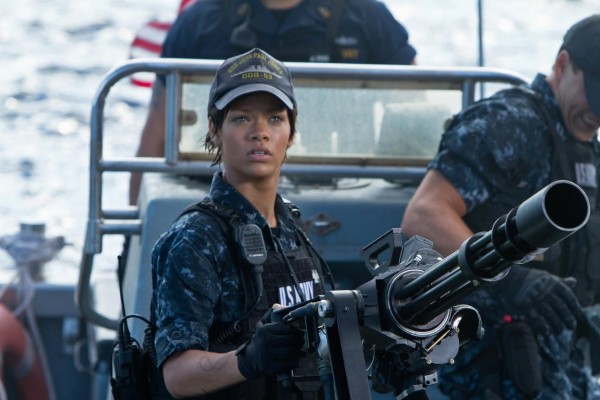