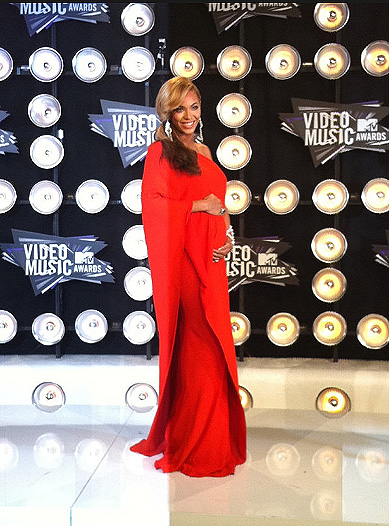 As you know the MTV Video Music Awards are currently taking place on the West Coast, what you may have missed…. Beyonce dropped a MAJOR bomb on the red carpet. PREGNANT!!!! Whoa!!!!!

When rumors spread last October, Beyonce denied even considering mini’s now as you can see she isn’t hiding anything. Last week we were shocked to hear about Kim Kardashian getting married, and honestly we expected the buzz to last a bit longer. But in true Beyonce fashion the spotlight has been adjusted, just in time to celebrate the launch of her new album! Although most tend to think that Beyonce is the queen of discrete publicity her announcement touched millions and proves that she’s just like every other celebrity waiting for her moment of the carpet! I’m sure, like most of us, you are wondering what in the world this child will look like, let alone how Beyonce and Jay will use it as a prop.

What ever it may be the child is literally a Star Before Birth!