When news broke of two of the biggest names in Hip Hop were collaborating for an album, “Watch the Throne”, some people were concerned for Jay-Z and Kayne West.  Now that they have released the first music video for the single, “Otis” where the duo frantically customize a $350,000 Maybach, we all can be concerned.  Many Car Industry professionals have been commenting on this interesting act of artist expression, such as Myles Kovacs Co-Founder of Dub Magazine who talked to MTV about the project.

“It’s a great gimmick and it looks ‘Mad Max’-ish. … They’re clearly rich enough that they can take something most people could never dream of owning and tear it up.. turning it into a torn-up plaything that’s probably not even street legal”

“If it’s just for show or to make a movie car, it’s pretty simple,” he said. “You’re just trashing the car, bolting on fake bumpers, pushing the wheels out, removing doors, cutting the roof off and adding flame throwers on the exhaust. But these guys are crazy to spend money to ruin a car like that.”

Estimates on the Maybach’s true cost of damage have ranged up to $150,000 to make something like this street legal, but for video sake possibly $100,000, still making the world’s most expensive luxury car worthless. Despite the cruel punishment the two had put on the car, they have decided to auction off the Frankenbach and the proceeds will help support the East African drought disaster. 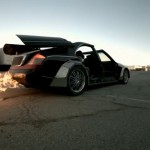 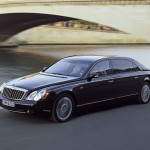 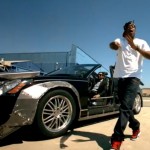