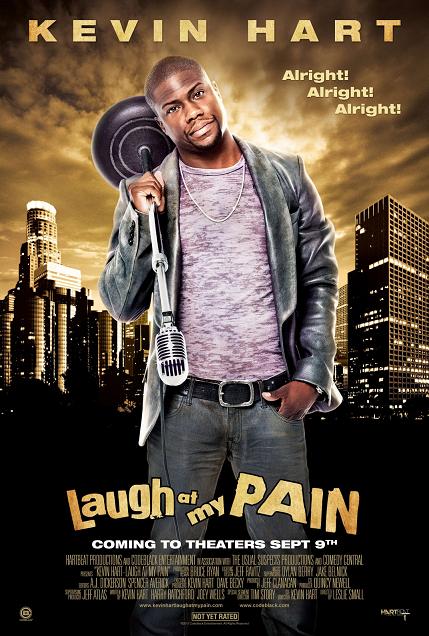 Right now, the funniest man alive, actor and comedian Kevin Hart has claimed that latter and put his name on the TOP of the list. Recently completing his 90 city Laugh At My Pain Tour, Kevin has done what many dream to do.  At the LA Live’s Nokia Theater Hart broke the record for surpassing Eddie Murphey‘s 2-day live comedy show ticket sales of $1.1 million. After setting such a high standard for comedians to come,  Hartbeat Productions (Kevin’s Co.) and CODEBLACK Entertainment compiled the best moments while on tour and made a movie, in theaters September 9th.

Also Kevin teamed up with Steve Harvey and is set to star in the highly-anticipated romantic comedy Think Like A Man (based on Harvey’s  Best-Selling book). as well as the upcoming film, The Five Year Engagement set to hit theaters next April. Kevin has been in many other films that have grossed over $510 mill such as, Soul Plane, Death At A Funeral, Meet Dave, The 40 year Old Virgin, Little Fockers, Barbershop, Not Easily Broken, Scare Movie 4 and many others.

But Kevin Hart doesn’t stop at stand up and films, recently he hosted the “11th Annual BET Awards”, which became the #1 Awards Show on Cable with over 7.71 million viewers.

We also featured Kevin Hart in our premier issue in 2010, where he touched on his new films and his feelings about his role on the  television show, Krod Mandoon and the Flaming Sword of Fire. He talked about working with greats like Chris Rock and Martin Lawerance on their movie Death at A Funeral. He also gave us the inside on his modeling career and what my be next for this Little Big Man.

For more Visit www.kevinhartlaughatmypain.com or