Now that the Championships are over it’s official!  The National Basketball Association (NBA) as declared a LOCK OUT.  Making it a $100,000 fine if the owner of the Dallas Mavericks delivers the Championship Rings to his players. On Friday the NBA Commissioner David Stern announced the lock out, after the collective bargaining agreement expired, the NBA became the second pro sports league to be shut down by it’s labor strife when the players and owners could not come to an agreement over salaries and revenue sharing.

“We had a great year in terms of the appreciation of our fans for our game. It just wasn’t a profitable one for the owners, and it wasn’t one that many of the smaller market teams particularly enjoyed or felt included in,” Stern said. “The goal here has been to make the league profitable and to have a league where all 30 teams can compete.”

Despite a three-hour meeting Thursday and a final proposal from the players – which NBA leaders said would have raised average player salaries to $7 million in the sixth year of the deal – the sides could not close the enormous gulf between their positions.

“The problem is that there’s such a gap in terms of the numbers, where they are and where we are, and we just can’t find any way to bridge that gap,” union chief Billy Hunter said.

All league business is officially on hold, starting with the free agency period that would have opened Friday. The NBA’s summer league in Las Vegas already has been canceled, preseason games in Europe were never scheduled, and players might have to decide if they want to risk playing in this summer’s Olympic qualifying tournaments without the NBA’s help in securing insurance in case of injury.

And Teams will be prohibited from having any contact with their players, most of whom won’t be paid or get their rings until a deal is done but insist they’ll hang in anyway. 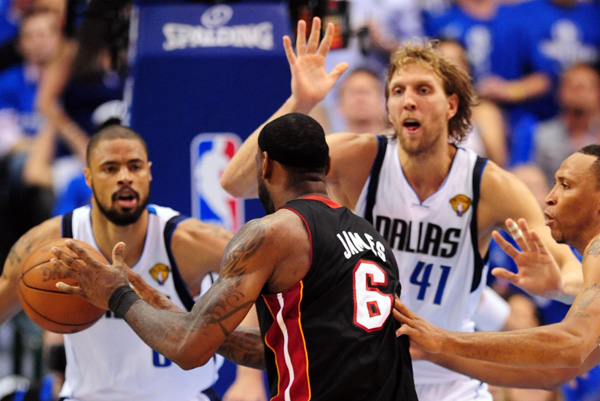 The lockout comes exactly one year after one of the NBA’s most anticipated days in recent years, when Lebron James, Dwyane Wade and the rest of the celebrated class of 2010 became free agents.

That free agency bonanza – highlight by the James, Wade, Chris Bosh trio in Miami – got the league started on a season where ticket and merchandise sales, ratings and buzz were all up. That weakened the owners’ case that the system was broken beyond repair, but it also demonstrated why they wanted changes, with Stern saying owners feel pressured to spend as much as possible to prove their commitment to winning to fans.

The last lockout reduced the 1998-99 season to just a 50-game schedule, the only time the NBA missed games for a work stoppage. Hunter said it’s too early to be concerned about that.

The NBA appeared headed this route from the start of negotiations. Owners said they lost hundreds of millions in every season of this CBA, ratified in 2005. League officials said 22 of the 30 teams would lose money.

So they took a hard-line stance from the start, with their initial proposal in 2010 calling for a hard salary cap system, reducing contract lengths and eliminating contract guarantees, as well as reducing player salary costs by about $750 million annually. Though the proposal was withdrawn after a contentious meeting with players at the 2010 All-Star weekend, the league never moved from its wish list until recently, and Hunter said he believes negotiations never recovered from that rocky beginning.

The union had previously filed an unfair labor charge against the league with the National Labor Relations Board for unfair bargaining practices, complaining the NBA’s goal was to avoid meaningful negotiation until a lockout was in place.

Despite frequent meetings this month, the sides just didn’t make much progress.

Owners want to reduce the players’ guarantee of 57 percent of basketball revenue and weren’t moved by the players’ offer to drop it to 54.3 percent – though players said that would have cut their salaries by $500 million over five years.

They sparred over the league’s characterization of its “flex” salary cap proposal – players considered it a hard cap, which they oppose – and any chance of a last-minute deal was quickly lost Thursday when league officials said the union’s move was in the wrong direction financially.

“I don’t think we’re closer; in fact it worries me that we’re not closer. We have a huge philosophical divide,” Stern said.

Hunter said he hopes the two sides will meet again in the next two weeks, after the union has looked at some additional documents it requested.

The players’ association seems unlikely, at least for now, to follow the NFLPA’s model by decertifying and taking the battle into the court system, instead choosing to continue negotiations. Hunter said last week he felt owners believe the 8th U.S. Circuit Court of Appeals in St. Louis, which is debating the legality of the NFL’s lockout, will uphold employers’ rights to impose lockouts.

“We’ll just continue to ask our fans to stick with us and remain patient with us. As players we want to play. That’s who we are; we’re basketball players,” Lakers guard and union president Derek Fisher said. “Right now we’re faced with dealing with the business aspect of our game. We’re going to do it the same way we play basketball. We’re going to work hard. We’re going to be focused. We’re going to be dedicated to getting the results that we want.”

About 90 percent of NBA players get paid from Nov. 15 through April 30, so they won’t be missing checks for a while. But Stern has warned that the offers only get worse once a lockout starts, so the league could try to push through elements of its original proposal when bargaining resumes.

Like with the NFL lockout, NBA players won’t be the only ones affected. Employees of teams and the league also face a very uncertain future. Stern admitted all options would be considered, including furloughs for his employees.