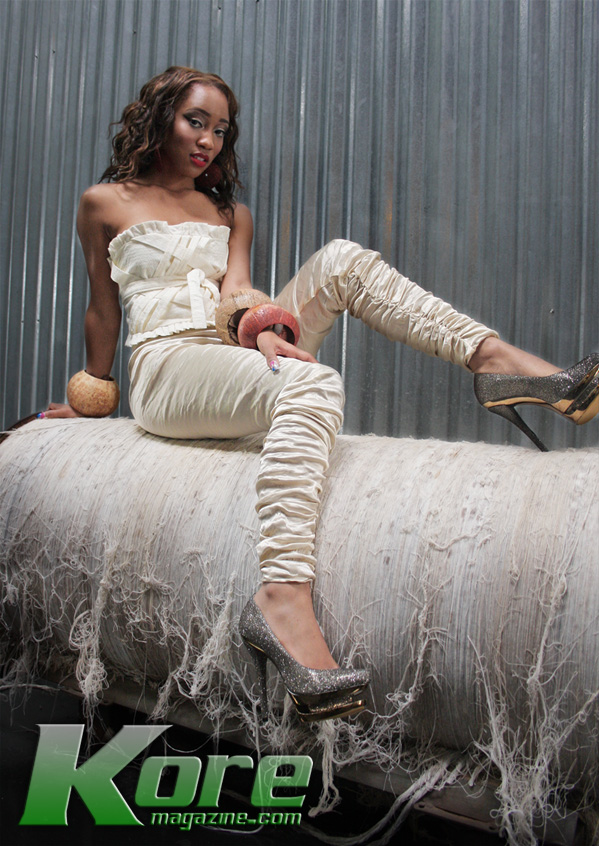 Dondria was featured on Kore Magazine’s Eco Edition. Her phootshoot was inspired by Eco Friendly Clothing and Recycled materials from the Cotrice Collection, she was styled by Henry Watson, Make Up was done by Shonte’ Renee and the shoot was done by Ross Mena.

How does it feel being Jermaine’s New Artist?

I’m very honored to have him working so hard and for him to be sensitive about my project.  I know that he’s had so much success already. It’s just kind of exciting to know that he thinks that I have the potential to be something great. It really means a lot. You know for him, for somebody like him, because he’s worked with so many people. He’s worked with Mariah, Janet, Monica, and TLC. He’s pretty much worked with almost everybody. So, it’s definitely an honor and I know that I have shoes to fill on this roster, but I think I can do it.

Who are you interested in working with from the line up of people that you’ve named? Also considering who you’ve worked with thus far, who do u want on your next project?

I would definitely love to work with Tank. I absolutely love him as a person. But, he’s extremely talented, and like a lot of people, because he’s my celebrity crush.  So, I think he’s fine too. But, people don’t really pay attention to what he’s actually doing. You know what I mean? He’s crazy with the music, and I definitely want him to write for me if nothing else. Yeah, I love Beyonce as well, and I would even like to dabble into other genres just to gain like a different type of audience. Like I would love to do something with like Rihanna, Carrie Underwood. Whatever is outside the box.

How do you feel about the pop-rock movement kind of clashing both genres of music together?

I mean it’s all music. I definitely just go straight up R&B. I’ll probably do a couple of different songs, but that’s never going to be my, you know what I mean? I’m all for it, because there is a different genre for everybody. Music is music.

We listened to the album. It’s excellent, might I say.

Well, actually when I made that title, it’s not really like an alter-ego thing, it’s more like knowing people. All the songs are Dondria, but I was showing people that Dondria is more than just Phatfffat off of YOUTUBE. You know Phatfffat was singing other people’s songs, being silly, being herself. And a lot of people didn’t think that I could be anything other than that. So, that’s why I named the title that, because Dondria isn’t just Phatfffat. I wanted to show people that I can be Dondria the artist, singing her own songs, writing on the album. And now “Her” album is doing excellent right now, and she has a top 10 record. So she [Phatfffat] can be just as successful as Dondria. 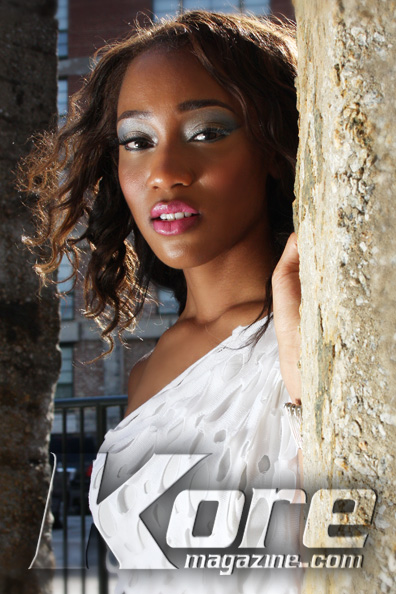 Why do you feel that a lot of people are not going green, when at the end of the day it’s going to save money and it going to help the environment? Why do you think that people aren’t jumping on the bandwagon?

I think that people need Green commercials, like you know how those cigarette commercial, how they show people dropping dead and stuff like that. I think we need stuff like that, because I think that people, as much information as is out there, are still not educated about it.  They don’t know much about it, and they’ll say, “Oh, whatever”.  They’re not really taking it serious. I guess it’s going to take word of mouth to help change people, and I would love to be the face of something going green to kind of educate and help people understand, because I definitely think it’s important to all of us.

Now that you are starting to be more aware of going green and all of the different avenues that you could go green, is there anything that you might start to focus on, or that you might in the next year or so take a stance for? There are so many ways to be Green. How do you plan to do your part?

Do you think it’s the lack of care or the lack of opportunity, you know, it’s easy to recycle, but people still don’t do it?

Yeah, I think it’s a little bit of both. We live in a very lazy world, and people think it’s too much to put their plastic bottles into the recycling bin, instead of just putting it in the trash. Not enough places have the separate containers.  A few places do like airports; they have the separate things for bottles, glass, paper, and then the regular trashcan. So, I think if more companies provided these methods we would be better off. Even on the streets, so people that walk and ride bikes, can do their part; if people start seeing it then they will actually start to take it into consideration. “Ok, I’m going to put my bottle in the bottle bin”. I know it costs more money, but I think the corporations need to help find and make more opportunities for people to recycle, that would help.

It really ties into what I do as well as far as being an artist. We live in a world that is so fast pace. Everybody wants to rush, rush, rush, but it’s not how you start it’s how you finish.  I said that when I thought about my album sales and stuff like that. Who cares how many albums I sell in a week? I want to know how many albums I sold this year. So, I apply that to saving money too.  And, I just think that people we’re naturally like hustlers and we just want to rush all the time, and hurry up and wait. So, I think that we just got to tell people to just slow down.

Well the Going Green movement is about changing today for our future and our children’s future on this planet. How do you feel about that?

Actually you said it best. It’s what we’re doing now, everything that we’re doing today is either going to be for the better or for the worse. It’s for our future, our children’s future, our family’s future, and you don’t want your kids walking around coughing and developing diseases because the ozone is so friggin’ dangerous. Why would you, when all you have to do is carpool, recycle and be more Green? Especially when you know it’s great for the environment. It’s called the carbon footprint. It’s the footprint that we leave behind. We as humans are not going to last very long if we keep going the way the same direction.

You mentioned about your album not going out strong but in the same finishing strong. How was the first week of you album sales? How do you feel about it?

I felt great about it actually. I don’t know what the exact number were,  but the first day that the album came out I was #2 on the R&B artist charts and #1 in top selling album.  I’m hearing great things. I rarely see anything negative. I’m looking out for you haters, but I haven’t really seen anything negative. And, I think people really appreciate it, because I really gave real R&B, and it’s something that is slowly coming back, but it’s not enough to be satisfied and fulfilled for those people who really love that kind of music. So, I’m really excited for how well it’s doing, but I just don’t want the buzz to stop. Like I said, I want to know how many I sold this year. So, I know that through word of mouth and obviously exposure, you know I just got off the Trey Songz and Monica tour, So, I’m gaining more fans each night I do a show and I’m just excited to see where this is going to take me, because so far I’ve had great success for a new artist.

I agree with you when you say that your album is definitely REAL R&B, We listened, and there were a lot of love songs, there’s a lot of references to past relationships, and how you feel. Where’s your man at? What does he do?

My man, he loves me. That’s what he does. Look!, I’ll say that we’ve been together for a few years and he was there before I got signed and even when I was like “What, whatever”, He was like you’re going to be a star. And, I was like please you’re just saying that because you’re my boyfriend, but he’s been there from day one. And, at this moment the newest thing we’ve done we have tattoos of each other and we have a scripture that we always read together, and my name is on him and his name is on me. So, we’re definitely committed and he’s somebody that I know that I’m going to be with, in the long run, and that I’m going to marry and have kids with., and all that stuff. Yes, Dondria is in love, and he is the inspiration for all of the love songs.

Can you say that the album is really from experience and not somebody else writing all the songs and the feeling that you are actually putting out?

Yeah, I would say that. I mean I definitely did. I wrote some stuff and I did have writers, but the type of music that I’m singing is stuff that I can relate to even if I didn’t write it. So, yeah.

Do you plan to do more writing in your next project?

Yes, I definitely do and I also plan on writing for other people. It’s just one song at a time, but definitely way more on the next album.

Now that the album has dropped. We know you were on tour with Monica and Trey Songs. What’s next for Dondria? Do you have any other moves you’re trying to make?

I definitely want to get on another tour. I mean, I think that’s one of the best ways to really promote, because it’s like they don’t have a place.  You know, people have a choice whether they want to listen to your music, or pay attention to you. But, if you’re at a concert you don’t have a choice, but to just sit there and listen. So, It’s definitely the best way to leave an impact. But, I’m also going to be putting out an EP of all the songs that we didn’t release on the album.  And then, I’m going to be doing a compilation album with a male R&B artist. So, there is definitely a lot more Dondria stuff coming your way. 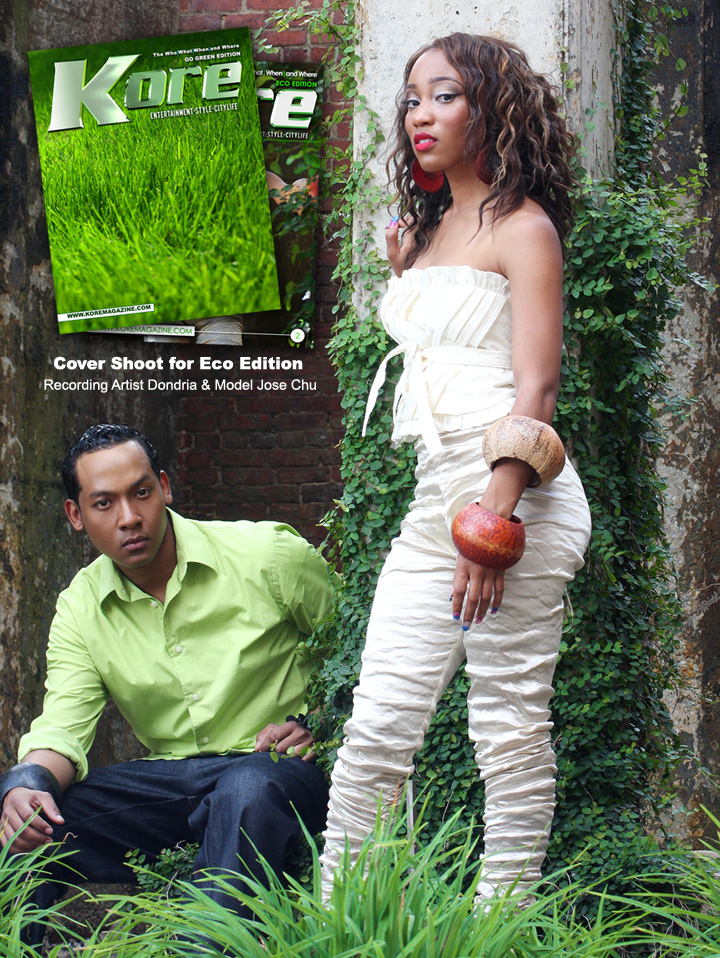