The Varsity team better look out, this High Schooler is blowing up. You might remember Vanessa Hudgens from the Disney’s “HighSchool Musical” which also stared her at-the-time boyfriend Zac Efron. You also may recall her picture scandal that leaked in 2007 and re-appeared in 2009, the inappropriate pics were spread all over the net, which probably killed her Disney career. 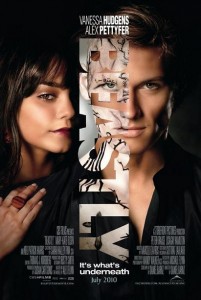 Don’t count her out just yet, with 2 new films hot the silver screen she is sure to obtain her spot on the Varsity team. March plans to be a good month for her, starting off with the release of Beastly on the 4th. A new generational twist on the classic Beauty and the Beast.  She stars along side Alex Pettyfer who plays the Beast, a New Yorker that is mysteriously transformed into a hideous monster to find true love.

Directed by Daniel Barnz teamed up with Author Alex Finn to remake this stunting love story.  The movie also includes actress Mary-Kate Olson and Neil Patrick Harris to round out the cast. Rated Pg-13 for Drama, Romance and Fantasy this might be the next thing to challenge the Twilight saga.

To view Trailer and other movie extras:

Then on the 25th Sucker Punch releases. Vanessa Hudgens plays an inmate of a Asylum (Blondie) that teams up with 4 other to escape from there wicked stepfather.  With time ticking the girls must battle evil and collect 5 items that will set them free for becoming a science project. A mix between Fantasy and Reality this movie takes you on a rollercoaster of thrills. Film also stars, Jamie Chung (MTV Real World), Emily Browning(Ghost ship), Abbie Cornish, Carla Gugino (Faster) and Jena Malone(Donnie Darko).