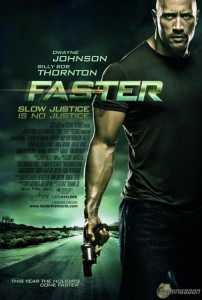 When it comes to professional wrestlers in Hollywood movies The Rock has had the most success. With his new film ‘Faster’he’s sure to keep his throne. This movie is an action packed  high speed thriller.

With one thing on his mind, Driver (Dwayne Johnson)is driven by revenge for his brothers murder. Hunting down one at a time The Rock goes on a high speed rampage while being chased by a veteran cop (Billy Bob Thornton).With retirement a few days away this might be his last case, literally. The chase becomes a little more difficult when a hired assassin is following to clean up any left overs.