Bank of America Atlanta Football Classic Chairman, Bill Lamar made the announcement at this morning press conference. Florida A&M University and Southern University-Baton Rouge.  Representatives from both schools were present to delivery thoughts on the new match-up and answer concerning questions ranging from growth endeavors to battle of the band predictions.
Celebrating more than two decades of community and tradition, the Bank of America Atlanta Football Classic is one of Atlanta’s hottest annual events offering a weekend jam-packed with football, social, community and educational activities for everyone.*
Southern University representative, Head Football Coach Lyvonia “Stump” Mitchell a former NFL running back, spoke on the teams delight to participate in the tradition “This has opened more doors for recruitment and acknowledgment for Southern.”
100 Black Men of Atlanta, over the past 23 years, has generated nearly $30 million of economic impact to Atlanta annually and brings more than 100,000 visitors into the city. Proceeds from the game support 100 Black Men of Atlanta’s Project Success, the organization’s post-secondary preparation and tuition assistance program.*
We’ll see you at the Game! 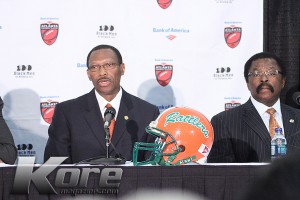 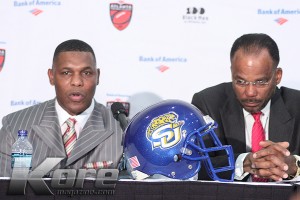