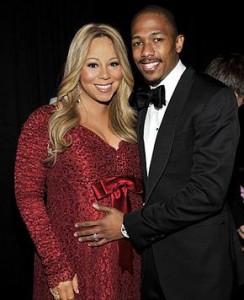 2008’s summer news was of a wedding that put fans on edge, then during last fall we learned of Mariah Carey’s pregancy, now Nick Cannon is proud to announce he’s havingTwinz, two birds with one stone, a boy and a girl. The couple is expecting the twins in Mid April. The debate of the twin’s sex has been buzzing loud for months now, even Twitter contests have been bringing a lot of attention to the subject.  But the soon Mom-To-Be is happy the news is out, stating to reporters the debate is over.

“Even before we announced it was twins, I was trying to keep everything genderneutral because I didn’t want to impose an identity on them too soon,” she reported..

With past pregnancy issues the couple is just glad to be near the end of a long journey. Doubling up their investment it’s soon to pay off.