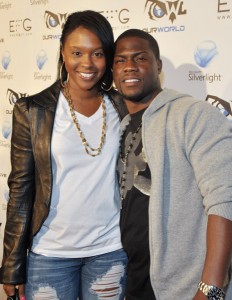 Hollywood Divorce is in full effect. Word is that comedian Kevin Hart is filing for divorce from Torrei Hart, his wife of 6 years.  The filed documents state that Kevin wants shared custody and would like the court to not give any spousal support to Torrei and also have Torrei band from leaving the state of California with their children without his permission or a court order.  Torrei recently spoke with reporters stating,

I’ve been married six years. Let me tell you why I’m really angry. I’m really angry because I’ve been having the same p*nis for the last six years of my life. I want some new p*nis. But here’s the thing, I can cheat because my husband is known and if I cheat it’s going to get back to him and I’m pissed off because I know he cheats.

Is this another story of “Being Famous” that went wrong? With all those Wife jokes, we’re surprised she stayed around this long. We got to sit backstage with Kevin Hart at one of his Atlanta shows and let’s just say, we’re not surprised about this Divorce at all..