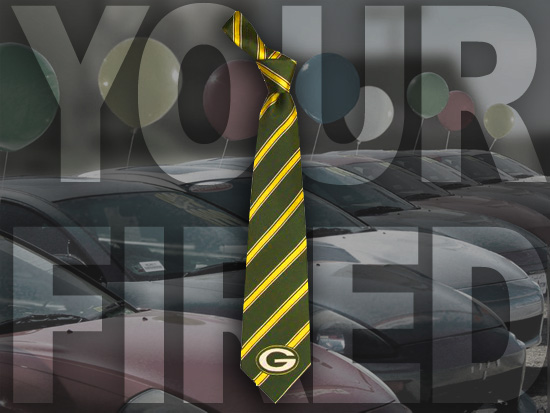 Yesterday at a Chicago area dealership a man was Fired for wearing a Packers tie. Now we all know that the Chicago Bears lost to the Green Bay Packers at the NFC Championship on Saturday, taking the Packers to Superbowl XLV (45) in Dallas, TX on Feb 6th.  John Stonewalked into his job on Monday wearing a Packers tie, celebrating his Grandmother favorite team’s victory, whom had past away recently and was buried right before the weekend game. His General Manager, Jerry Roberts, pulled him to the side and told him to take off the Tie.  Not being clear on why, assuming it was a joke and realizing he was in dress code Stone continued on about his work. A few moments later the Roberts (Boss) approached him and demanded him to take his Tie off, and then Fired him!

“I didn’t know you could get fired for wearing a tie… I’m supposed to dress up.  I’m a car salesman.” Stone told the Chicago Tribune.

General Manager Jerry Roberts spoke with other media outlets in the area, explaining that the dealership had done previous promotions with the Chicago Bears and that he was concerned it would look bad to their customers, going against the previous promotions.  Sounds like Bad Communication + Sore Loser = YOUR FIRED!