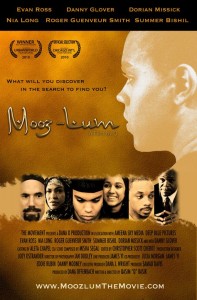 Peace Films Announced December 15, 2010 – After sold-out advance screenings, online momentum, and heightened global anticipation, Mooz-Lum, the critically-acclaimed film about a Muslim-American youth’s struggle with his faith and identity, will finally be released in U.S. theaters on February 11, 2011

Starring Nia Long, Evan Ross, Roger Smith and Danny Glover, all of who were phenomenal in embracing each character in this astonishing film portraying the difficulties of being raised in a strict Muslim upbringing. This script is amazingly written and appreciated and with such a competent cast Basir was able to touch an emotion in this country that must be addressed. “I’m extremely optimistic that the release of our film will have the power to give a voice to some and enlighten many others.” -Basir

Amazed at the universal parallels, and my own connection to the film, this is a story that is appropriate for every religion, culture, age and race. Ignorance in itself is challenging, and there is a thin line between ignorance and stupidity. We are ignorant from the lack of Knowledge, and in the essence of stupidity we act based on that lack. Mooz-Lum hits the Kore of a number of actions based on pure un-saturated ignorance. I was moved to tears by the depictions of almost each character, and my own self ignorance brought to light. I don’t want to give the details because in just a few short weeks Atlanta will host a Premiere Screening for Mooz-Lum based on your vote on http://eventful.com/moozlum

We understand why Mooz-Lum  Written and Directed by Qasim “Q” Basir  has made such head lines. S

I challenge you to first STOP and VOTE for this amazing Indie Film produced by Dana Offenbach, and second to share with you friends, family, co-workers, neighbors, and even your enemies.

“We are very excited that AMC and Eventful are partnering with us to bring this very important film to an audience that has been waiting to see it.” – Film Producer Dana Offenbach