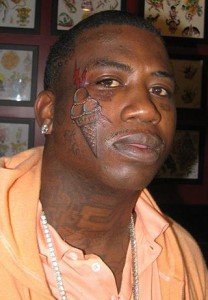 Atlanta rapper Gucci Mane has taken he’s So Icey movement to a whole new level with his newest tattoo.  Radric Davis (30) aka Gucci has joined the club of facial tattoos amongst rappers such as, Lil Wayne, Birdman, The Game,Soulja Boy, Chris Brown, Wiz Khalifa and Tyga. Gucci Mane visited Tenth Street Tattooand was inked by Shane Willoughby. Gucci commented about his tattoo, stating that it’s his way of showing his fans, he’s living true to his word, “Cool as Ice”. Unfortunately some fans are starting to be concerned, considering his recent evaluation at a Mental Institution following a court order. We have a few questions, What are the Lighting Bolts mean? Will this effect him making his next album, titled  ‘The State vs. Radric Davis 2: The Verdict“? Probably not. And finally How would you cover that up? So Three Scopes for Gucci Mane and the Brick Squad. See these other rappers and their facial tattoos. 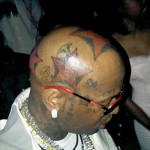