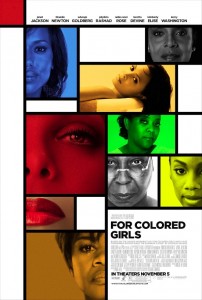 A few years ago I received a book titled “For Colored Girls Who Have Considered Suicide When the Rainbow Is Enuf.” Honestly, I can not recall the individual that gave me the book, but I remember reading the title and thinking “why would you give me a book about suicide.” The book, which I found out was actually o Broadway production at the Boothe theater in 1976, written by Ntozake Shange made such an awesome impact on my life. The show ran for  742 Performances closing in 1978 and was nominated for the 1977 Tony Award for best play. I began to tell every young “colored” girl I knew about the book, hoping to have someone to discuss it with.
When I heard that Tyler Perry was adopting this script and creating a film, I wondered how he would translate such an awesome piece. Unlike The original play featured 7 women, all known by their colors performing a collection of 20 poems. Tyler has given each character a name, their poems connecting them with a different issue and what it means to be a Woman of Color. Each character portrays a woman represented in the collection of poems.
I was beyond impressed with the film. If you can for a moment imagine, me sitting front row in the theater of a Private screening, crying my eyes out, mascara running down my check. Which I don’t do for Tyler Perry Films this was perry’s first film to be rated R, and I felt every bit of it. No faker at all. This movie is a must see for all women and all people, we all represent a color and we are all affected by the issues presented in this film. I encourage everyone and I particularly challenge Black Women to see this Film. Truly and effort worth mention.
A Special thanks to Sister Song, who held a private reception and panel discussion following the viewing of the film!
I do not typically ask for support on films, but this is very powerful, Please go out this weekend Friday November 5 and view the film.. No bootleg
Starring…
Kimberly Elise (Crystal/Brown) Janet Jackson (Jo/Red) Loretta Devine (Juanita/Green) Thandie Newton (Tangie/Organe) Anika Noni Rose (Yasmine/Yellow) Kerry Washington (Kelly/Blue) Tessa Thompson (Nyla/Purple) Phylicia Rashad (Gilda) Whoopi Goldberg (Alice/ White)
Macy Gray (Rose) Michael Ealy (Beau Willie) Omari Hardwick (Carl) Richard Lawson (Frank) Hill Harper (Donald) Khalil Kain (Bill)