While in Houston, TX, on his Light Dreams and Nightmares Tour, Drake brought Jas Princeon stage for his birthday on Friday, Oct 29th. After wishing him a Happy Birthday, Drake started to recite a special rap which at the end mentioned that he was giving Jas Prince a lambo which was parked outside. If you don’t know who Jas Prince is, he’s the son of Rap-A-Lots CEO, James Prince, Jas is also the one that found Drake and brought him to Lil Wayne and Young Money. 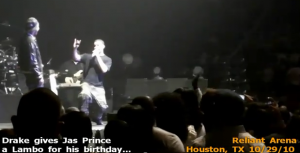