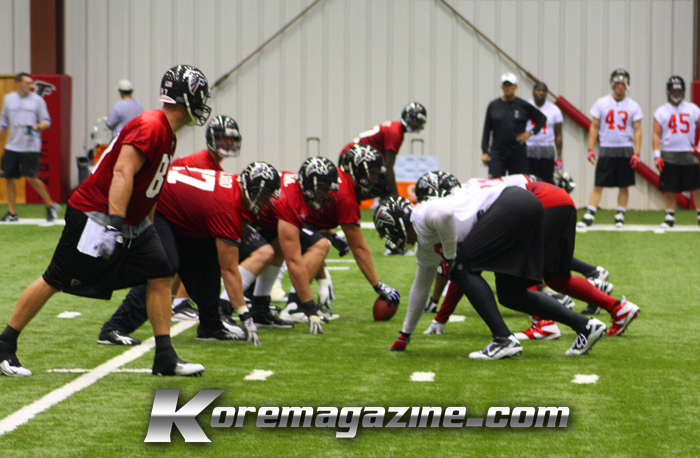 The rallying cry for the 2010 Atlanta Falcons is to simply “Rise Up.” But will the Falcons be able to “rise up” and have a winning season after coming back from key injuries during the 2009 season? This weekend, we traveled UP to the Atlanta Falcons Training Camp in Flowery Branch, Ga. to take a peek at what’s in store for the upcoming season.

Just a few days in to camp, Falcons head coach, Mike Smith shared his thoughts on the players thus far starting with WR Roddy White. “Roddy had an outstanding off-season for us through the OTAs’ and off-season conditioning program. I think he is in the best shape he has been in since I’ve been here.” WR Roddy White had 1,153 yard receiving last season with 85 catches in 2009. In practice, he looks to be in very good shape and explosive coming down the field and so did WR Michael Jenkins who had some pretty decent catches throughout practice.

When it comes to the Falcons number three slot for wide receiver, Smith is looking closely at Harry Douglas. “We certainly hope he comes back at 100 percent,” says Coach Smith. “Brian Finneran, Eric Weems and Kerry Meier make up the rest of a very solid group, and there will be a lot of competition right behind the top three spots.”

According to Smith, White has been extremely committed this whole off-season. Last year, he says, was a little different in terms of training camp, but White hasn’t missed a day since March which brings hope to the wide receiver group.

RB Michael Turner is back healthy and strong and looks to be in good shape after suffering an ankle sprain against the Carolina Panthers last November. Determined to come back better than before, Turner is looking to improve his hand game. “More and more people are willing to run that position by committee…you have a featured running back, a third down running back, and it would be nice to have Michael in some of those third down situations where you are having the nickel package in play on the defensive side.”

Even with key injuries last year, the Falcons ended with a 9-7 season. Many are predicting that the Falcons will come out on top of the NFC South-yes that even means knocking off the defending Super Bowl champs, the New Orleans Saints.

Nevertheless, the Falcons number one goal is to stay healthy for the first game of the season starting against the Pittsburgh Steelers sans Big Ben. With that in mind, I think the 2010 season will be getting off to a great start!